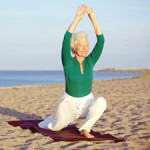 Below you’ll find some of the conditions that cause discomfort or pain in the knee as well as treatments that can help alleviate injuries of the knee.

The major types of arthritis that affect the knee are osteoarthritis, rheumatoid arthritis, and posttraumatic arthritis.

Osteoarthritis is the most common form of arthritis in the knee. It is a degenerative,”wear-and-tear” type of arthritis that occurs most often in people 50 years of age and older, but may occur in younger people, too.

In osteoarthritis, the cartilage in the knee joint gradually wears away. As the cartilage wears away, it becomes frayed and rough, and the protective space between the bones decreases. This can result in bone rubbing on bone, and produce painful bone spurs.

Osteoarthritis develops slowly and the pain it causes worsens over time.

Rheumatoid arthritis is a chronic disease that attacks multiple joints throughout the body, including the knee joint. It is symmetrical, meaning that it usually affects the same joint on both sides of the body.

In rheumatoid arthritis the synovial membrane that covers the knee joint begins to swell, This results in knee pain and stiffness.

Rheumatoid arthritis is an autoimmune disease. This means that the immune system attacks its own tissues. The immune system damages normal tissue (such as cartilage and ligaments) and softens the bone.

Posttraumatic arthritis is form of arthritis that develops after an injury to the knee. For example, a broken bone may damage the joint surface and lead to arthritis years after the injury. Meniscal tears and ligament injuries can cause instability and additional wear on the knee joint, which over time can result in arthritis.

A knee joint affected by arthritis may be painful and inflamed. Generally, the pain develops gradually over time, although sudden onset is also possible. There are other symptoms, as well:

About half of all injuries to the anterior cruciate ligament occur along with damage to other structures in the knee, such as articular cartilage, meniscus, or other ligaments.

Injured ligaments are considered “sprains” and are graded on a severity scale.

Grade 1 Sprains. The ligament is mildly damaged in a Grade 1 Sprain. It has been slightly stretched, but is still able to help keep the knee joint stable.

Grade 3 Sprains. This type of sprain is most commonly referred to as a complete tear of the ligament. The ligament has been split into two pieces, and the knee joint is unstable.

Partial tears of the anterior cruciate ligament are rare; most ACL injuries are complete or near complete tears.

The anterior cruciate ligament can be injured in several ways:

Several studies have shown that female athletes have a higher incidence of ACL injury than male athletes in certain sports. It has been proposed that this is due to differences in physical conditioning, muscular strength, and neuromuscular control. Other suggested causes include differences in pelvis and lower extremity (leg) alignment, increased looseness in ligaments, and the effects of estrogen on ligament properties.

When you injure your anterior cruciate ligament, you might hear a “popping” noise and you may feel your knee give out from under you. Other typical symptoms include:

Many times a posterior cruciate ligament injury occurs along with injuries to other structures in the knee such as cartilage, other ligaments, and bone.

A complete tear of the posterior cruciate ligament, back view.

Injured ligaments are considered “sprains” and are graded on a severity scale.

Grade 1 Sprains. The ligament is mildly damaged in a Grade 1 Sprain. It has been slightly stretched, but is still able to help keep the knee joint stable.

Grade 3 Sprains. This type of sprain is most commonly referred to as a complete tear of the ligament. The ligament has been split into two pieces, and the knee joint is unstable.

An injury to the posterior cruciate ligament can happen many ways. It typically requires a powerful force.

The typical symptoms of a posterior cruciate ligament injury are:

Kneecap dislocation occurs when the triangle-shaped bone covering the knee (patella) moves or slides out of place. The problem usually occurs toward the outside of the leg.

Kneecap (patella) dislocation is often seen in women. It usually occurs after a sudden change in direction when your leg is planted. This puts your kneecap under stress.

Dislocation may also occur as result of direct trauma. When the kneecap is dislocated, it can slip sideways to the outside of the knee.

Symptoms of kneecap dislocation include:

The first few times this occurs, you will feel pain and be unable to walk. However, if dislocations continue to occur and are untreated, you may feel less pain and have less immediate disability. This is not a reason to avoid treatment. Kneecap dislocation damages your knee joint.

Patellar tendinitis is an injury to the tendon connecting your kneecap (patella) to your shinbone. The patellar tendon works with the muscles at the front of your thigh to extend your knee so you can kick, run and jump.

Patellar tendinitis, also known as jumper’s knee, is most common in athletes whose sports involve frequent jumping — such as basketball and volleyball. However, even people who don’t participate in jumping sports can get patellar tendinitis.

For most people, treatment of patellar tendinitis begins with physical therapy to stretch and strengthen the muscles around the knee.

Pain is the first symptom of patellar tendinitis, usually between your kneecap and where the tendon attaches to your shinbone (tibia).

The pain in your knee may:

Patellar tendon tears can be either partial or complete.

Partial tears. Many tears do not completely disrupt the soft tissue. This is similar to a rope stretched so far that some of the fibers are frayed, but the rope is still in one piece.

Complete tears. A complete tear will disrupt the soft tissue into two pieces.

When the patellar tendon is completely torn, the tendon is separated from the kneecap. Without this attachment, you cannot straighten your knee.

The patellar tendon often tears at the place where it attaches to the kneecap, and a piece of bone can break off along with the tendon. When a tear is caused by a medical condition — like tendinitis — the tear usually occurs in the middle of the tendon.

A very strong force is required to tear the patellar tendon.

Falls. Direct impact to the front of the knee from a fall or other blow is a common cause of tears. Cuts are often associated with this type of injury.

Jumping. The patellar tendon usually tears when the knee is bent and the foot planted, like when landing from a jump or jumping up.

A weakened patellar tendon is more likely to tear. Several things can lead to tendon weakness.

Patellar tendinitis is most common in people who participate in activities that require running or jumping. While it is more common in runners, it is sometimes referred to as “jumper’s knee.”

Corticosteroid injections to treat patellar tendinitis have been linked to increased tendon weakness and increased likelihood of tendon rupture. These injections are typically avoided in or around the patellar tendon.

Steroid use. Using medications like corticosteroids and anabolic steroids has been linked to increased muscle and tendon weakness.

When a patellar tendon tears there is often a tearing or popping sensation. Pain and swelling typically follow, and you may not be able to straighten your knee. Additional symptoms include:

Menisci tear in different ways. Tears are noted by how they look, as well as where the tear occurs in the meniscus. Common tears include bucket handle, flap, and radial.

Sports-related meniscus tears often occur along with other knee injuries, such as anterior cruciate ligament tears.

Sudden meniscus tears often happen during sports. Players may squat and twist the knee, causing a tear. Direct contact, like a tackle, is sometimes involved.

Older people are more likely to have degenerative meniscus tears. Cartilage weakens and wears thin over time. Aged, worn tissue is more prone to tears. Just an awkward twist when getting up from a chair may be enough to cause a tear, if the menisci have weakened with age.

You might feel a “pop” when you tear a meniscus. Most people can still walk on their injured knee. Many athletes keep playing with a tear. Over 2 to 3 days, your knee will gradually become more stiff and swollen.

The most common symptoms of meniscus tear are:

Without treatment, a piece of meniscus may come loose and drift into the joint. This can cause your knee to slip, pop, or lock.

Conditions of the Knee

Click on the topics below to learn more about them on the website of American Academy of Orthopaedic Surgeons.